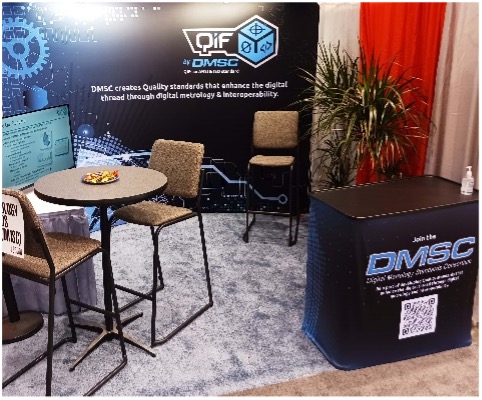 DMSC participated at the International Manufacturing Technology Show (IMTS) in Chicago, September 12-18, 2022. IMTS is the largest and longest-running industrial trade show in the Western Hemisphere, and is held every two years. The event sponsor, AMT, reported total registration at over 86,000 attendees.

DMSC involvement included an exhibitor booth and a meeting room set up to accommodate members and other interested parties for an in-person General Membership meeting. Most of these monthly meetings are held virtually, so this was a unique event. The meeting was live-streamed for the benefit of those that could not attend in-person. A light buffet and beverages welcomed about 50 attendees to the meeting.

Keeping to an abbreviated agenda, the meeting opened with some remarks from DMSC President, Curtis Brown. Next, Executive Director Mark Thomas gave a report on the State of the DMSC, followed by DMSC Director/Treasurer Rosemary Astheimer presenting recognition awards to individuals who have made special effort over the past year, and offered DMSC appreciation to all our members.