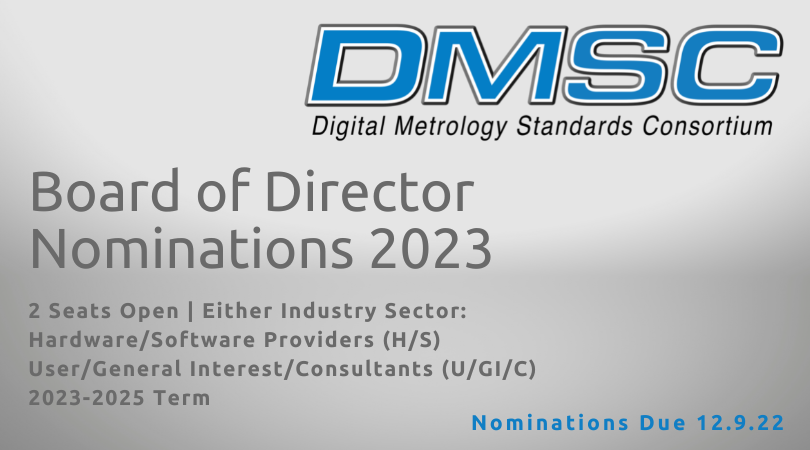 DMSC BoD members are elected from the DMSC membership. At the end of this calendar year, two BoD members will be rotating off, and two will be elected for a three-year, 2023-2025 term.

By DMSC Policy, the DMSC has the following constraints on the DMSC BoD:

• The BoD shall maintain a minimum of:
o Two Directors from within the Hardware/Software (H/S) Provider’s categories
o Two Directors from within the User/General Interest/Consultants (U/GI/C) categories
• The BoD shall consist of a maximum of six elected persons serving on the BoD.
• Each elected director’s term shall be a service of three years. Note, by policy, the DMSC President is a voting member of the BoD and whose office is not subject to term limits.
• Only one person from the same member company can serve on the DMSC BoD at any given time.
• Nominees can only come from DMSC member companies of good standing, whereas “good standing” means that the nominee’s company has paid their DMSC membership dues prior to any nomination, the nominee’s company is an active participant in one or many DMSC working groups or committees in the past year or demonstrated their support of the DMSC or DMSC standards, and by any other previously announced criteria as deemed necessary by the BoD.
• Existing BoD members can be nominated and elected for consecutive terms.
• Only one vote is allowed per member company for each opening in the DMSC BoD.

Based on the constraints specified above, nominations are now open for two 2023-2025 BoD members from either category. A list of current DMSC BoD members can be found on the DMSC website: click here

Nominations for these new 2023 openings must be submitted to Mark Thomas, DMSC Executive Director, mark.thomas@qifstandards.org by close of business (COB) December 9, 2022. Self-nominations are welcome.

Election announcements will be made on January 3, 2023.

Please direct any questions to Mark Thomas by email.